Was the Old Northeast’s “Cinder Lady” a Victim of Spontaneous Human Combustion?

Author’s Note: This time of year, our thoughts turn to spirits and ghostly goings on. This is the second in our series of stories about Old Northeast hauntings. Coming soon will be the story of a suicide victim haunting his former home on 8th Avenue NE.

It’s estimated there are about 200 cases of people who have died from fire that lack definite causes of the flames that consumed them. One of the most baffling and mysterious cases happened right here in the Old Northeast (ONE) 71 years ago. On the evening of July 1, 1951, 67-year-old Mary Hardy Reeser settled into her overstuffed easy chair for the last time. That night, she would be reduced to a pile of ashes save for her left foot still wearing its satin house slipper. 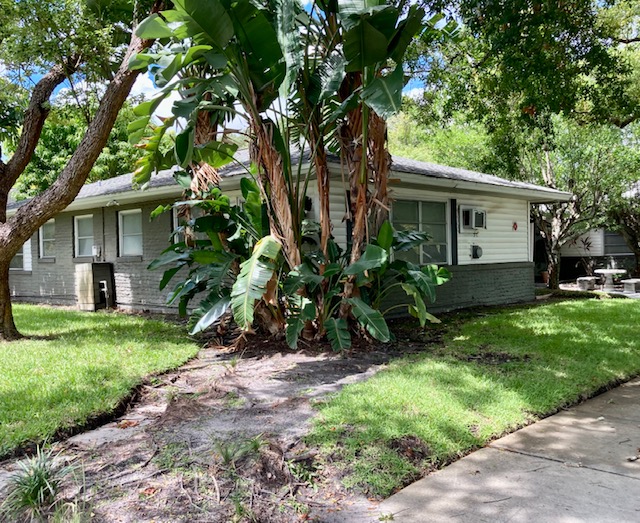 The small, mid-century apartment building that Mary Hardy Reeser called home was built in 1947 and is still at the corner of 12th Avenue NE and Cherry Street.

Mary had moved to her comfortable studio apartment at 1200 Cherry Street from Pennsylvania following the death of her husband. The couple had one son, Dr. Richard Reeser Jr., a prominent St. Pete physician. He and his family lived close to Mary in the ONE and she spent much of her time with them.

On the day Mary died, it was a typical hot, humid summer day. Mary saw her son and daughter-in-law that afternoon and following dinner with them, she settled into her apartment for the evening. She was an avid smoker and often had a cigarette before bedtime.

The next morning, Mary’s landlady attempted to deliver a telegram to her and noticed the apartment’s doorknob was very warm. Fearing a fire, she called the police. What greeted them when they entered Mary’s apartment was horrific. The overstuffed easy chair was reduced to its wire springs and pieces of wood frame. A pile of ashes and intact left foot was all that remained of Mary. Further examination by St. Pete police uncovered pieces of her backbone, six teeth and her skull had shrunk to the size of a baseball.

The police were baffled. How could a fire so intense as to literally incinerate Mary’s 170-pound body result in little more damage to the apartment than the destroyed chair, the scorched carpet beneath the chair and smokey soot on the upper walls and ceiling near the site of the inferno. Drapes near the site were untouched as were the sheets on the two twin beds in the same room. With no air conditioning in the unit, all the windows were open. If Mary had accidentally set herself on fire, would she not have screamed for help? Her landlady lived in the adjoining apartment and could often hear Mary’s radio coming through the thin wall separating their units. But that evening she heard nothing.

Many theories as to what caused the fire flooded into the police department, including a bolt of lightning through Mary’s open window and murder from someone with something to gain from her death. But these and other theories were summarily dismissed. The police department turned to the FBI for help and sent them a box containing Mary’s remains along with other items from the site of the deadly blaze. The FBI’s 100-plus page report (now housed at the St. Petersburg History Museum) concluded Mary probably fell asleep while smoking a cigarette and died as a result. 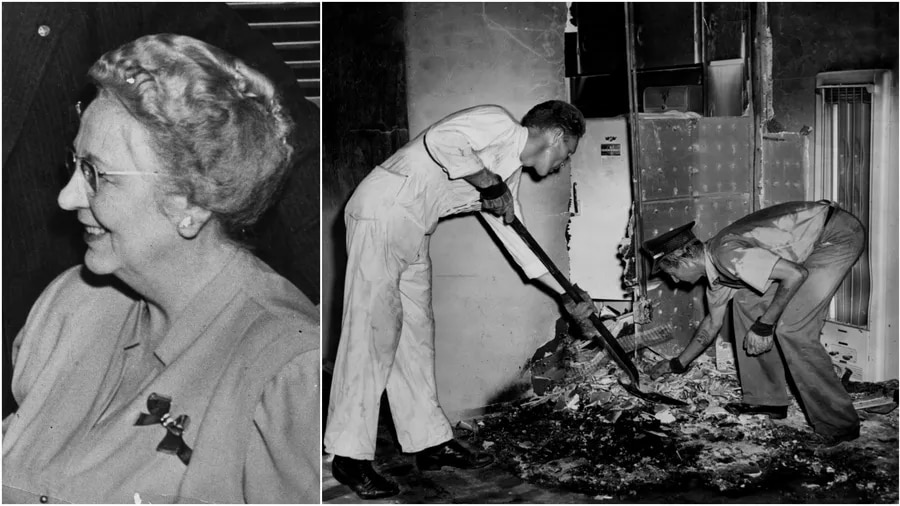 Mary Hardy Reeser, left, and authorities sifting through the burnt aftermath of the fire that consumed her.

The FBI’s report wasn’t the end of the Mary Reeser, aka “Cinder Lady”, story. It has been the subject of many articles, books and even tv shows over the years. And it’s turned into one of the prime examples of what some believe is a case of spontaneous human combustion (SHC), the combustion of a human body without an apparent external source of ignition. Cases of supposed SHC have been reported for hundreds of years but the scientific community has generally debunked the notion.

Whether Mary died from a cigarette igniting her nightgown or was an actual victim of SHC may never be proven. Being reduced to a pile of ashes, however, might not have been the end of Mary’s presence in the ONE. Her family told the St. Petersburg Times that they believe her spirit still lingered following her untimely death. Mary’s grandchildren were said to have felt her presence and their parents told them there was nothing to fear from their loving, albeit deceased, grandmother. Is Mary’s ghost still lingering in the neighborhood or possibly in her old apartment? The current tenant was reluctant to discuss the possibility of Mary still hanging around so we may never know for sure.