What started out 20 years ago as a “we’ll give it a shot and see if anyone comes” has turned into a not-to-be-missed annual porch party costume extravaganza. Steve Deal and Frank Hay, 116 18th Avenue NE, have been hosting the Old Northeast’s annual October Halloween porch party ever since the idea of porch parties became a reality in 2002.

“We began hosting the October porch party in our former home on 8th Avenue,” Frank explains. “We love Halloween and decided to dress up and hoped other folks would, too. But we had no idea whether they would or not.” Their party theme, “Come as You Aren’t,” has been the same since that first affair 20 years ago. “The theme is basically a license for straight men to dress up in drag,” Frank says with a laugh.

Indeed, there have been a lot of men in drag over the years, in addition to a plethora of other phenomenal costumes, to the point it is rare that any of the 100-plus partiers doesn’t don a costume. “It’s amazing the lengths people go to now to dress up. We’ve had celebrity look-alikes from Andy Warhol to Frida Kahlo,” Steve points out. “Being in a costume is just a great conversation starter,” he adds. “And we’ve seen friendships that started at our porch parties that turn into lifelong affairs.”

The hosts pull out all the stops to create a Halloween wonderland bar none! They start planning the décor in early September and begin decorating one room at a time until the entire house and backyard pool deck and patio are an eye-popping bonanza of all-things Halloween. The dining room table even hosts a ghostly dinner party of macabre guests, complete with eerie place settings, flat wear, goblets, and an appropriately spooky centerpiece.

After 20 years of playing masters of Halloween one would think Frank and Steve would have more than enough decorations to fill two homes. But that doesn’t ever seem to be the case and each year they continue to add to their spooky stash. “We went to Target the other day to buy a light bulb and ended up walking out with $100 worth of new decorations,” Frank explains as he rolls his eyes. “There’s just such great stuff out there!”

The live guests are treated to some very scary (but tasty) party treats, including finger foods that look like real digits. “When we started, we were urged to keep it simple and just provide water; no need to feed people,” Frank notes. “But of course, we couldn’t do that, and we started coming up with food that fit the Halloween theme.” It’s not unusual now for guests to bring foodstuffs to add to the feast, sort of like a Halloween potluck party.

The amazing effort Frank and Steve go to does not go unappreciated by their guests. “Every year we get thank you cards, even gifts, afterward,” Steve points out. Last year a woman sent them a note explaining how her son, who is on the autistic spectrum, was so awed by the party and all the fabulous costumes. “She said it was an amazing treat for her son and she was so thankful for the experience.”

The pandemic put an unwelcome pallor on the October affair the last two years, with no party two years ago and the party last year relocated outside in the alley behind the house. But this year the festivities will be back in all their glory, with a DJ spinning poolside and more decorations than ever creating the Halloween holiday mood. “After two years of dealing with the pandemic, we’re going to really blow it out this year,” Frank says. And you can bet on it! 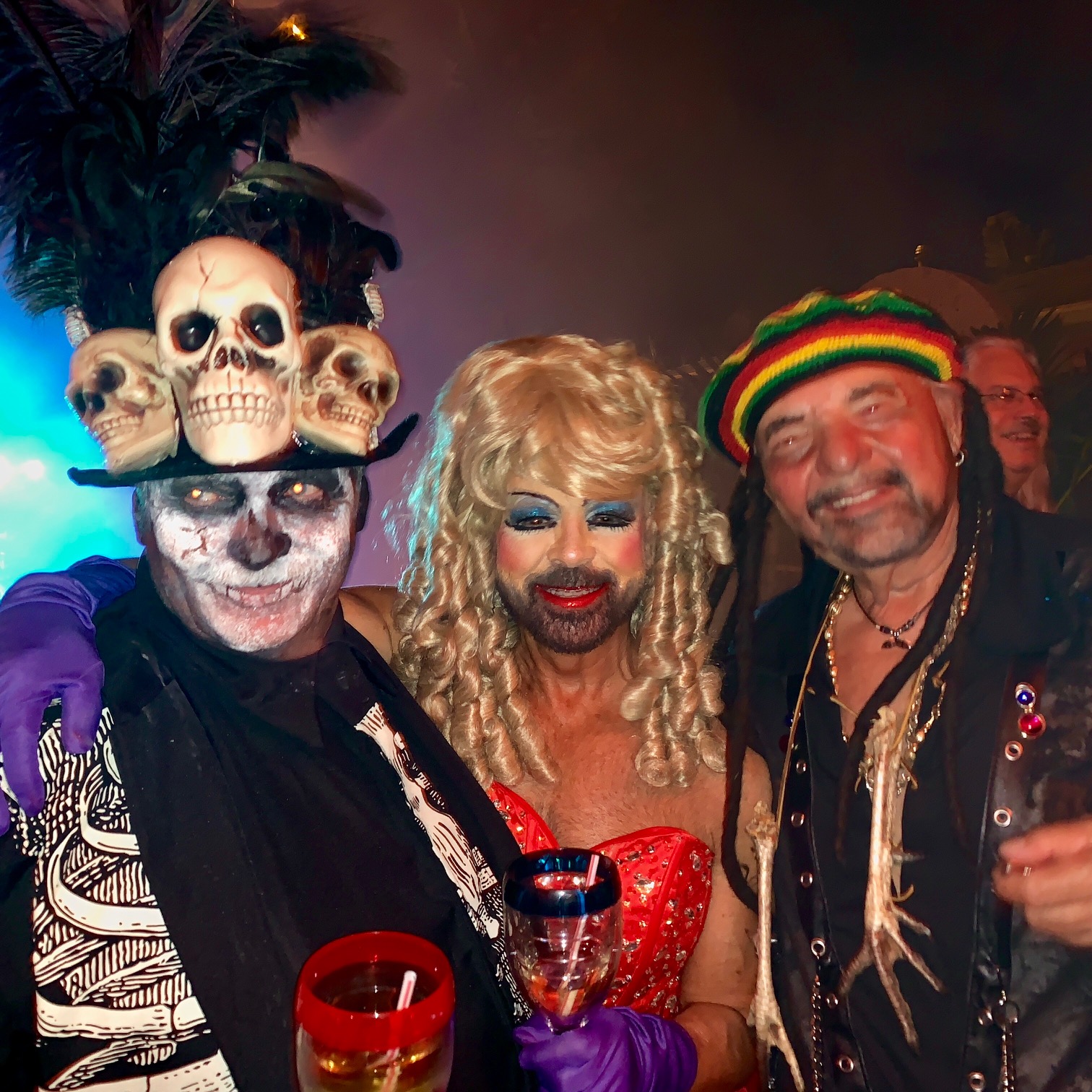